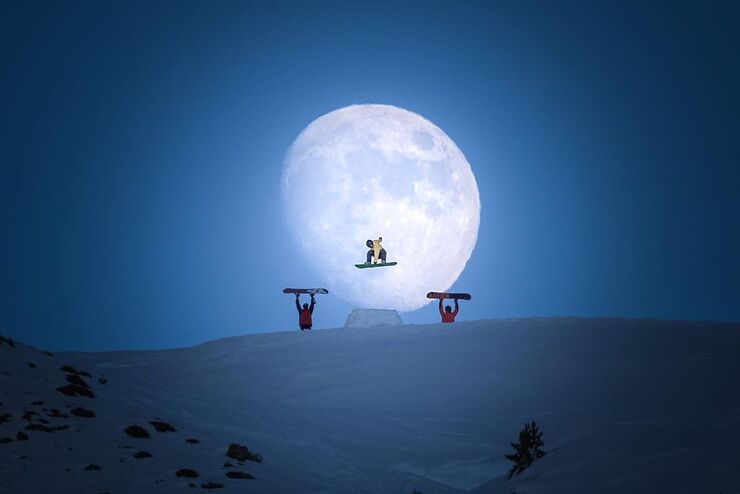 Aren't you eager to see the 2021 best Moon pictures?

I'm sure you're always looking for new sources of inspiration, right?

Well, Moon photography is a craft that includes the knowledge of planning, (good timing), composition, and getting the settings right.

But most important of all is curiosity that makes the images worth getting a prestigious award. Like our own PhotoPills Awards... ;)

This year, the jury (the PhotoPills team!) has selected the 32 best images of 2021, and we invite you to explore the power one image can capture.

And if you want to learn how to take the best Moon pictures:

And now, have a look at what we consider the best Moon pictures of 2021.

"This photo was planned from Mallorca, without ever having been to France. It was a determining factor when planning the trip in order to be at this place at the planned date. The weather was on our side too!"

This is one the 2021 best Moon pictures, as Toni was January's Moonmaster.

"Last moon of 2020 with an abandoned church and Alps on the background, I took this picture before the sunrise of December 30"

"Obviously when there is a full moon, the sun sets more or less at the same time as the moon rises; but there are small differences from month to month. Here the moon rise was about 20min before sunset, which is exactly what is needed. This way the moon is already quite high over the horizon when the sun has set and the light is best. Not a composite image; single image only. PhotoPills was essential in finding the right position of the moonrise since little time and margin was available to set up."

"Friends asked me if I could do their wedding invitation picture. Of course I said yes ! But I'm no wedding and portrait photographer, so I did what I like the most, technical shoot with a bit of astronomy in it. Thanks to PhotoPills for the shot preparation!"

This is one the 2021 best Moon pictures, as Aurèle was February's Moonmaster.

"I arrived in a hurry with only moments to spare. There was a cloud on the horizon but it cleared just in time. I was able to set up, get focus, and do one single test shot before the Moon had hit the right spot for me to get it dead center on the CN Tower. Planned moon rise over the CN tower which happens to be very similar to @photopills most recent tutorial video as well."

"Last week we spent three days looking for the magic of the Moon, and trying to innovate and take new images, just as we do in the winter months. This photo was a real challenge, and we're so proud to have achieved it. It is the result of great teamwork. A team composed by the photographer and the riders @richman_53 and @rubiosnb."

This is one the 2021 best Moon pictures, as Yhabril was March's Moonmaster.

"The alignment between corso Francia, in the foreground, the basilica of Superga (on the hill) and a magnificent moon"

"With a weekend curfew in place due to coronavirus I had to find a workaround for this image. I made a rough plan on PhotoPills and then found a hotel with a terrace that lined up nicely for the Moon to rise behind Çamlıca Mosque. Luckily they had a room available and the weather was perfect. I used a star trailing technique to create a Moon trail and then blended the final Moon on top of the trail in Photoshop."

"Beautiful moon set behind the Statue of Liberty. Always wanted this capture! Success!!"

"After one year it was the right time again and I got lucky. First I thought the clouds would ruin my plans, but finally I only had to adjust a bit some contrast and sharpness on the moon to fight against this mystical glow in the clouds."

This is one the 2021 best Moon pictures, as Tobias was May's Moonmaster.

"Supermoon over ESO Paranal observatory in Chile. It was an absolutely epic adventure to capture this view ! All the planning was done using PhotoPills. To obtain this image I drove all the way up North and I spent a night in the desert waiting for this configuration. The Moon was setting over the mountains in twilight and it was really tricky to capture the scene."

This is one the 2021 best Moon pictures, as Yuri was June's PhotoPiller of the month.

"Beautiful moonrise with the gothic architecture of Riverside Church. It was perfect weather, temperature and plot using PhotoPills."

This is one the 2021 best Moon pictures, as Veronica was July's Moonmaster.

"A true moon Manhattanhenge captured on a perfect night straight down 42nd St! You couldn't ask for better details and weather conditions. PhotoPills was spot on with the plan!"

"The idea for this photo actually came to me a couple of days before the full moon, and just the day before I called a friend to help realize the idea you see in the photo, he agreed immediately even though the situation was extremely dangerous as it is a bridge that is high a good 50 meters, but everything went well and I did what I intended and I can freely say that this is one of my favorite photos I have taken in the last 5 years as far as photography is concerned."

"Buck Moonrise behind the Manhattan Municipal Building. Did you know the statue on top of this building is the 2nd largest statue in New York? The Statue of Liberty is the largest."

"Slam dunk on the moon. Let's jump to the moon to leave behind this 2020 giving a big dunk to 2021!!!!! Happy new year!!! Today my friend and great basketball player @miguel__alonso2 came to jump with Moon behind, and he worked hard!!!! And this is how this 2020 has ended for me, with a fantastic photo shoot a few hours before entering 2021.... Planned with @photopills"

This is one the 2021 best Moon pictures, as Toni was August's Moonmaster.

"Taken 3500 meters away on the opposite side of the river Mersey, Liverpool. The moon looks like an umbrella over the Liver Buildings with the clouds covering the lower half of the moon. Carefully planned using PhotoPills. I have tried this shot on many occasions and failed. At last it was a success."

"Crescent moon aligned with the Space Needle. The Olympic mountains can be seen in the background and the sunset clouds have turned a reddish purple."

This is one the 2021 best Moon pictures, as Francesco was September's Moonmaster.

"Moon Over Mount Etna South East Crater. In February 2021, Etna showed intense volcanic activity characterized by 6 paroxysmal episodes that poured ash columns and lava fountains even more than 500 meters high. The episodes were mostly located near the new south-east crater which poured numerous lava flows into the Bove Valley. The episodes were characterized by a short duration but accompanied by intense activity that fractured the structure of the crater from which the flows poured. On the night between the 24th and the 25th, Mount Etna again showed an intense activity and for this reason I decided to place myself at the "Piano Bello" refuge, calculating the exact position so that the moon would set near the crater, aligning itself just above. Volcanic clouds and hot currents have given the Moon a liquid appearance tinged with a warm coloring due to both glow and ash. The final shot shows the drama of the scene enhanced by the presence of volcanic clouds and the crescent moon at 94% illumination, by the crack of the south-east crater and by the flow that flows from its crater rim. Canon 6d, sigma 150-600, iso 800, f/5.6, 5s for the landscape and iso 100, 1/125s for the Moon, 357 mm."

"The Blue Moon rises over Paris."

"The Moon over the lava flows of the Cumbre Vieja volcano, on the island of La Palma."

This is one the 2021 best Moon pictures, as Abián was October's Moonmaster.

"The last supermoon of 2021 was setting over the Seattle skyline this morning at 5:20am. The day before, I used the planning tool on PhotoPills to mark possible locations. Then I made the trip to the location and used the AR feature to see where the moon will set. I was planning for the moon to be exactly on top of the Space Needle like a golf ball and it worked."

"Wednesday morning's full Hunter's Moon, "cradled" by the cables of the Chesapeake Bay Bridge in Maryland. This shot was made possible by PhotoPills. I set up where I planned and did not move during the moonset."

"Earthshine. The juniper of the gardisancho is a centenary icon of the moors of Castile. Its longevity and its silhouette emerge in the enormous plain. The crescent moon with Earthshine completes an icy scene shrouded in mist and mystery. The temperature at that time was -8°C"

"Plotted this on PhotoPills and it lined up just how I imagined it."

This is one the 2021 best Moon pictures, as Dan was November's PhotoPiller of the month.

"I had been waiting more than 1 year to get this picture showing the full moon over the straight aligned pylons. Thanks PhotoPills"

"Planning carried out in the Blue hour, just at the moment that the halogens that illuminate the Mill were turned on, and in this way to achieve detail and texture on the Moon, without the need to use bracketing."

"First Winter Moonsession of the season with the boys... Yesterday we wanted to find something different, so we looked for a location in which the relative size of the Moon would be bigger, and where the riders could jump towards me. Awesome teamwork once again. I told them where to build the kicker and by the time I was deciding my position, they worked hard to get it ready. This time I was further than ever, that's why the Moon looks bigger."

This is one the 2021 best Moon pictures, as Yhabril was December's Moonmaster.

You just saw what I consider the 2021 best Moon pictures.

I hope that they are a source of inspiration and that they give you enough ideas to plan your next Moon shots with PhotoPills – the best app for Moon pictures!

But most importantly, have fun!

The Moon is waiting for you...

Special thanks to Sandra Vallaure, a great photographer and friend, for her tremendous help in making this article possible.

Note: Some links on this page are affiliate links. What does this mean? If you buy/rent using these links you're helping support us and it costs you nothing extra. Thank you for your support. 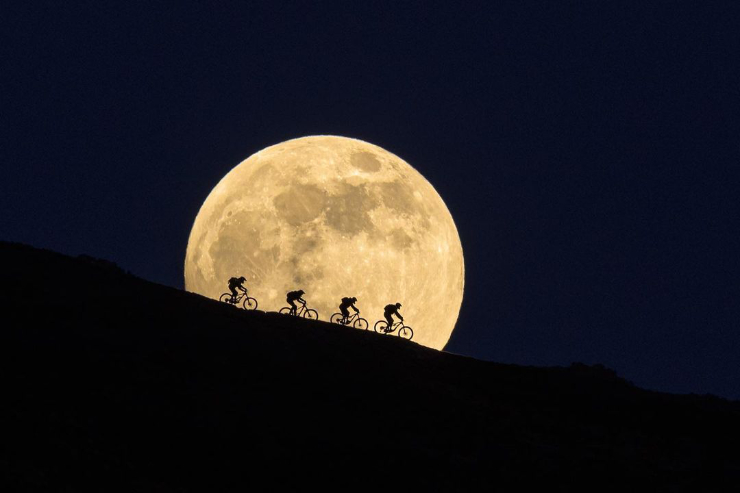 The 11 Best Moon Photographers to Inspire You in 2022